Skip to content
This section contains an overview of the most relevant exhibitions in Switzerland and neighbouring regions. Each item is connected to the organizing museum.

One Size Does Not Fit All

Clothing has always been protection, decoration as the social sign of identity. Clothing also depicts the contours of the body in the most creative and often complicated way. The exhibition illustrates this history from the 17th to the 21st century through a selection of women’s and men’s clothing and contemporary creations.

Ceramics of the Weimar Republic

The Musée Ariana is presenting German ceramics from the period of the Weimar Republic (1919-1933). The world was then experiencing a period of exceptional artistic ferment, the rise of modern art and abstraction, from Russian Suprematism and Constructivism to De Stijl movement and the Bauhaus school. These pieces, generally decorated with airbrush designs, are both illustrations of utilitarian ware and at the same time the reflection of a highly innovative form of artistic expression. 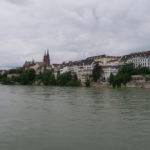 Around 200 000 people of 200 different nationalities live in Basel today. The city forms the centre of a large trinational region with a long history. The exhibition presents the major events and historical milestones that have shaped the city and the region. There will be items attesting to key events in the city’s history, objects of everyday use and six short films that open up historical perspectives on contemporary issues such as the influence of immigration and migration, the role of the pharmaceutical industry, the relationship between town and country. There are also interactive installations combining city maps, historical photographs, facts and figures on Basel’s urban and demographic development.