The Castles of Colombier and Boudry

The castles of Colombier and Boudry in the canton of Neuchâtel remind us of ancient (Roman and medieval) times. On the site of the present castle of Colombier stood since the 1st century a Roman villa with an area of about 500m2. The estate was at that time already situated on an extensive road network … END_OF_DOCUMENT_TOKEN_TO_BE_REPLACED 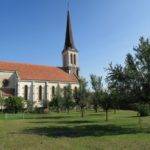 Cressier is a village of about 1 900 inhabitants between the lakes of Neuchatel and Biel on the edge of the Thielle canal. This canal connects both lakes. The village does not distinguish itself economically from the surrounding villages: viticulture is an important economic activity. The village has a medieval history, which is closely linked … END_OF_DOCUMENT_TOKEN_TO_BE_REPLACED

Büren an der Aare is a medieval town in canton Bern. The history of this town is a mirror of the history of Switzerland. The Celts, Romans, Alemanni and Franks have left their (archaeological) traces. From the thirteenth century onwards the city was in the hands of successively the Barons of Strassberg, the County of … END_OF_DOCUMENT_TOKEN_TO_BE_REPLACED