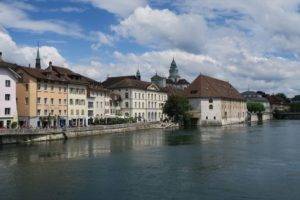 The Romans founded the settlement Salodurum (literally watergate) around 20 AD. The main reason was the building of a road (and bridge over de Aare river ) between Aventicum (Avenches) and Vindonissa (Windisch).

The town became a fortress with the usual Roman public and private buildings, some of the remnants can still be seen in the Old Town.

The town acquired large territories afterwards and joined the Swiss Confederation in 1481.

The prestige of the city was confirmed by close ties with France (and the lucrative mercenary business) and the establishment of a French embassy (until 1792).

The famous Hotel de la Couronne and many splendid buildings and monuments are the witnesses of this period.  (Source: www.solothurn-city.ch).