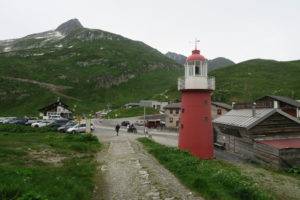 No mountain is too high for Swiss people, but what about the lighthouse on the Oberalp Pass at an altitude of 2 046 meters?

The Rhine Lighthouse is an hour’s walk from the source of the Rhine. The Gotthard massif is the source of four rivers: the Rhine, Reuss, Rhone and Ticino, flowing to all four quarters of the compass. The 85 kilometers long hiking Trail Vier-Quellen-Weg (the Four Headwaters Trail) shows the way.

The Lighthouse is intended as a call to travel to the source of the Rhine, as a siren.  It was built in 2010 in the Swiss village of Alpnach, and then transported to the Oberalp Pass.

The Lighthouse is meant to be a visual icon for the entire Rhine area and its 50 million people. It is a replica of a Lighthouse in  Hoek van Holland (the Netherlands), 1 233 kilometers away from the Gotthard Massiv. The original can be seen in the Maritime Museum of Rotterdam.

The lighthouse may be located on a beach again, within 20 million years.