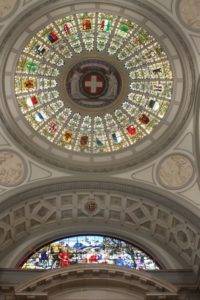 Switzerland or the Swiss Confederation (Eidgenossenschaft) consists of twenty-six cantons (Article 1 Federal Constitution). This article also defines the territory of Switzerland: it consists of the areas of the cantons.

The cantons (The history of each canton can be found under Local History from 4-12 April 2021).

There are immense differences between the cantons’ surface areas, population, urban and/or rural character, language, religion and geological characteristics. Just as essential as this constitutional construction is the linguistic, cultural and political identity of the inhabitants of these sometimes centuries-old republics.

The creation of today’s cantons has been an ongoing process over centuries. As such, it is not fully covered in this contribution. These cantons already existed in 1848, although in 1979, Jura split off from the canton of Bern to form a new canton in its own right.

The system of cantons as constitutional constructions and democratic sovereign republics in a sovereign country is unique in Europe and possibly in the world.

In all other fields, the cantons are sovereign. Each has its own Constitution, parliament, government, health care and education system, taxation, civil service and jurisdiction (subject to the Federal Constitution and international treaties).

Article 50 of the Constitution confirms the national hierarchy: the Federal government, the Cantons and the Municipalities (the lowest level of constitutional entities).

The cantons are, in short, democratic republics and sovereign states, insofar as Article 3 does not delegate powers to the federal government.

The cantons are also represented at the federal level in the Standerät (Council of States) in the federal Parliament.

This also explains why the federal government has few civil servants: about 38,000. The Supreme Court in Lausanne (Bundesgericht) ultimately decides on questions concerning the implementation of federal law.

There are hundreds of treaties between two or more cantons: inter-cantonal law (Art. 48 Constitution) thus  takes precedence over cantonal law.

Foreign policy is an exclusive domain of the federal government (Art. 54). The government informs the cantons at an early stage about foreign policy that is also relevant for the cantons (Art. 55). The Conference of the Cantonal governments (Konferenz der Kantonsregierungen, located in the House of the Cantons in Bern) plays an essential role in this process. The relationship with the European Union — nowadays mainly the new (institutional) treaty with the European Union (the so-called Rahmenabkommen or accord-cadre) — is particularly crucial.

The cantons can conclude treaties with other countries if they belong to the powers of the canton and do not harm the law and policy of the federal government.

The cantons are obliged to inform the government before concluding treaties (Art.56). Treaties with lower authorities in other countries are allowed without prior notice (Art.56).

Moreover, through the Standesinitiative (Article 160 Constitution), cantons can ask the federal parliament to initiate legislation.

This means that the cantons (and the people) can adapt and change the Constitution and laws at any time. Both founders of the Confederation always have the last say.