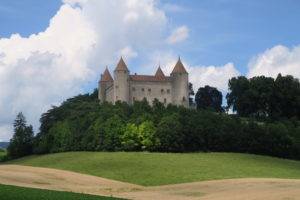 The commune Champvent (canton of Vaud) was first mentioned in a document from 1011, signed by Rudolf III, last king of the kingdom of Burgundy (888-1032). One of the best preserved castles in this canton can be admired in this small village. The castle is a characteristic ‘Carré Savoyard’, quadrangular with high walls, flanked by round towers on each corner and built mid thirteenth century. Similar castles exist in Yverdon, Grandson and Morges.

The castle knows a turbulent history. The Lords of Champvent and Grandson and the Counts of Neuchâtel were among the owners. A local family was the owner at the time of the Burgundian wars (1474-1477) and ally of the Duke of Burgundy Charles the Bold. After the Battle of Grandson (1476), the castle was destroyed by Bernese and confederal troops, but soon after it was restored to its former glory by the owner. However, after the conquest of Vaud in 1536, Bern took over the property. There were several private owners after 1798 and today the castle is still privately owned, but a heritage of national importance. (Source: C. Dey, Champvent. L’histoire de ses 1 000 ans, Morges, 2011).