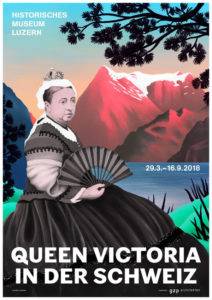 The exhibition about the Queen´s Visit. Photo: Historical Museum Luzern

The Queen in Switzerland

The queen withdrew from public life fter the death of her husband Albert of Saxe-Coburg and Gotha (1819-1861).

She embarked on this journey in memory of her husband, who was enthusiastic about Switzerland.

It made a significant contribution to her recovery. Although she travelled with a small court and incognito, half of Europe knew about the trip.

She visited Lucerne and destinations such as the Rigi and the Pilatus. The highlight was the three-day excursion to the Furka Pass and the Rhone glacier.

She kept a diary and recorded her impressions in watercolours.

The journey of the most powerful woman in the world at the time was the beginning of the boom of the (British) tourist industry in Central Switzerland.