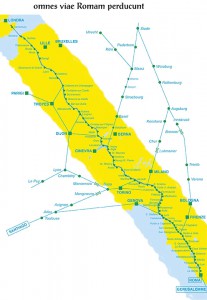 The Via Francigena. Photo: www.francigena-international.org)

Many routes in many countries lead to the final destination. Geoffrey Chaucer’s stories of 14th-Century pilgrims in the Canterbury Tales even strengthened the international journey of religious devotion. Canterbury, however, is also the starting point of another, less known ancient pilgrimage, the Via Francigena. The 1 944 km route was created by the 10th-century Archbishop of Canterbury, Sigeric. He travelled from Canterbury to Rome and documented his journey. His writings give a detailed and unique account of his route. His documents also give an interesting insight in the European dimension of medieval Europe. Though modern means of transport and communication were absent, the mentality was much more European and international than today. No cultural or linguistic barrier was too high.

The so-called Dark Ages knew  cultural exchange and centres of excellence, not only in (Muslim) Spain, but also in Ireland, France, Switzerland and other territories. Monasteries played a key role in the continuation of the Roman heritage and cultural exchange. The pilgrimages were an important part of this dynamic and open European society and a revival of a millennium old tradition can be witnessed nowadays. The Medieval Ages are never far away. (source: www.francigena-international.org).