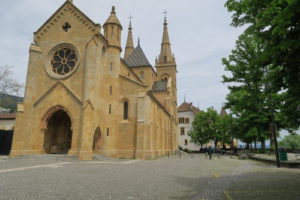 The southern tower was built around 1300, the second tower in the 19th century.

Until the beginning of the 13th century, the architecture followed the Romanesque tradition of the Upper Rhine. The Gothic style of the Burgundy and French-speaking Switzerland arrived afterwards.

The cathedral of Lausanne inspired the builders. The chevet of the church shows a similiar ensemble of sculpture and statues and anthropomorphic or zoomorphic figures.