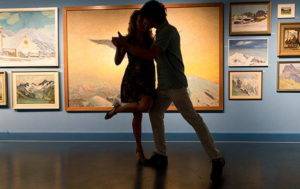 Descendants of Swiss who emigrated to Esperanza in Argentina in the second half of the nineteenth century have aften not forgotten their roots. Esperanza (“hope”) was founded by European settlers in 1853 as a colony on the flat grasslands of Santa Fe province, a region which is still agricultural in character. Generations have since grown up preserving their notion of Switzerland in their own way. The exhibition Suiza Existe is a search for clues to the past in the Esperanza of 2018, about what Switzerland means in Esperanza. They looked, for example, at “Nenes Biergarten” , the Asociación suiza “Guillermo Tell” and the grave of the Hugentobler family. They also met with Maria Rosa Zurbriggen, who recalls how her father would forecast how much rain would fall in a year, in best Valais tradition.