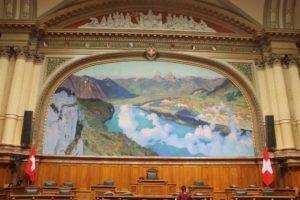 Myth, legend, historical fact or a combination, William Tell (Wilhelm Tell) and the year 1291 are closely linked to the origins of present-day Switzerland, like Rome cherishes Romulus and Remus and Greece worships the goddess Athens as the founders of their cities.

The mountains the Grosse and the Kleine Mythen, however, are hard granite facts. The Grosse Mythen (1899 m.) is also called the Matterhorn for mountain hikers.

These two peaks in the vicinity of Schwyz are also depicted on the famous panorama of Charles Giron in the Bundeshaus, as a symbol of the beginning of the Eidgenossenschaft.

The Kleine Mythen (1811 m.) is flanked by the Haggenspitz (1761 m.). The Mythen are witnesses of the battle in the thirteenth and fourteenth century between Schwyz and the monastery Einsiedeln, which was supported by Habsburg.

This conflict was not about sovereignty or nation-building, but about local interests: the use of water, pastures, cattle and forest. It led to the legendary battle of Morgarten in 1315.

The Grosse and Kleine Mythen saw these developments and facts..