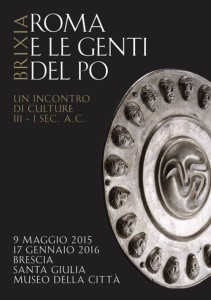 Romanization in Lombardy and Italian Switzerland

The tribes of the Po Valley in Northern Italy had different attitudes towards the military and political ambitions of Rome in the last century before Christ. Some were hostile to Rome (the Insubrians), some concluded an alliance (Venetians and Cenomanes), and others remained hesitant (Ligurians).

After the conquest in the last decades before Christ, the Romans tried to gain the conquered peoples’ loyalty through subtle tactics of political and religious propaganda.

After consolidating their presence, the Romans began to found or to rebuild cities and a process of urbanization o the Po-Valley, Cisalpina in the Republican era and the Italian region XI or Transpadena in the time of Emperor August (27 B.C.-14 A.D.).

The Roman taste manifested itself in private premises as well, with houses and mansions packed with mosaics and luxurious furnishings. An exhibition in Brescia pays attention to the process of romanization of Lombardy and subsequently southern Switzerland. (Further information: www.bresciamusei.com)