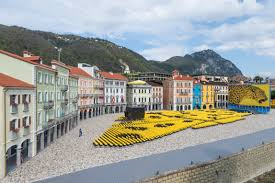 The place where Switzerland is smaller than anywhere else will reopen on 17 March. Swissminiatur in Melide, canton of Tessino, was inaugurated on 6th June 1959. It is an open-air miniature park on the shore of Lake Lugano, surrounded by mountains which have been declared a UNESCO World Natural Heritage Site.

Visitors can admire more than 130 models at scale of 1:25 which represent the most important buildings, monuments and means of transportation  and a 3 560 meters long model railway with 18 trains, boats are on the lakes, cable cars and funiculars go up and down the mountains and cars move along the highway. New attractions include the restaurant on top of the Schlithorn, the Piazza Grande in Locarno and Rapperswil castle.

The biggest miniature is the federal assembly building in Bern. The park will be fully interactive in 2019, at the occasion of its seventeenth birthday. (Source and further information: www.swissminiatur.ch).