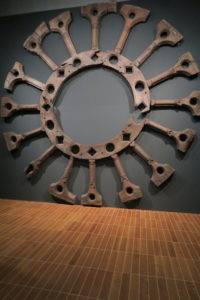 One Thousand Years Ago in Basel

The exhibition Gold and Glory. Gifts for Eternity (Gold und Ruhm. Geschenke für die Ewigkeit) of the Historical Museum (Historisches Museum) and the Art Museum (Kunstmuseum) in Basel offers not only a unique insight into the high culture around the year 1000 but also into the extensive European contacts. Trade has always been a European phenomenon, even after the fall of the Roman Empire in the fifth century, despite its political fragmentation. Until the rise of the Carolingian Empire (around 750), it was mainly the monasteries that took care of and passed on the culture. From the twelfth century onwards, students and scholars would visit other countries in large numbers. The Middle Ages are wrongly called ‘dark’, mainly due to a lack of understanding and (written) sources and anachronism. What would a medieval man or woman think of the Holocaust, the First and Second World Wars or the omnipresent drug culture and organised crime? The millennial celebration of the inauguration of the Basler Cathedral or Münster brings this period to the fore with numerous musical and museum events and lectures. (Further information: www.baslermuenster.ch).