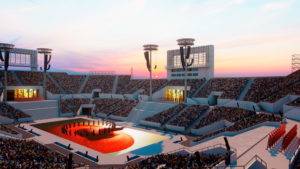 History of a Great Festival

The Fête des Vignerons (Unesco World Heritage) is a tradition that has been handed down from generation to generation since the 18th century in the canton of Vaud in a region that stretches from Pully to Lavey near Valais.

It started in the 17th century. Vevey, which is located on the main European trade routes, generated a significant part of its income from wine-growing and transit trade.

The city is surrounded by vineyards and one in ten inhabitants worked in viticulture. The city lived to the rhythm of the seasons and the wine calendar.

The Confrérie des Vignerons (the Brotherhood of Winegrowers) called itself  ‘Abbaye de l’agriculture’. The Brotherhood organized an annual parade. It was a cheerful parade of the winegrowers and their employees.

This parade led to the General Assembly of the Council (le Conseil) of the Brotherhood, where their work was commented upon.

In the 18th century the parade was further extended. Around 1770, the Brotherhood decided to reward the best winegrowers and their workers and they were placed at the head of the parade, accompanied by the Abbé-Président (the ‘Ab-President’), the members of the Council (le Conseil) and a large number of musicians, singers and costume figures who symbolised mythical figures and viticulture.

The quality of the parades and the number of spectators increased and in 1797 a platform was established on the Marktet Square of the city.

The Fête des Vignerons was born. The book Helvétie 1800-1819 (Paris 2010) by Maurice Denuzière gives a good picture of this period in Vevey and Vaud.

The Napoleonic period, the creation of the canton of Vaud and the political and economic difficulties did not stop the development of the festival after 1813 and a new festival was organised in 1819.

The parade became a real show. The arena of 1865 already had more than 10 000 spectators and the quality of music, theatre, choreography and costumes was constantly improving.