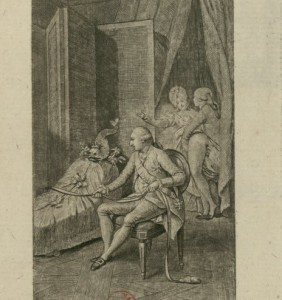 The famous Swiss historian Jacob Christian Burckhardt (1818-1897) was the first to analyse the use of satire, parody and wit in renaissance Europe. He wrote about its developments in the late Middle Ages and how hostile armies, princes, and nobles, provoked one another with symbolical insult, and how the defeated party was loaded with symbolical outrage. Wit, parody and satire were also used as a weapon in theological disputes.

But wit and satire could not be an independent element till the individual with personal pretensions had appeared. Its weapons were then by no means limited to the tongue and the pen but included tricks and practical jokes which form a chief subject of many collections of printed works. Often the place of wit and satire is taken by mere insolence, clumsy trickery, blasphemy, and obscenity. Many of the ‘Burle’ are thoroughly comic. The inventors and retailers of jokes soon became inevitable figures.

The parody, satire and with have a long history, dating back to ancient Greek and Roman times. The Greek comedies were in fact satire and parody. Roman authors and political figures had sharp pencils and tongues as well.

It was mainly in the Latin West of Europe that writers used these forms of expression and statements. The Middle Ages saw a sharp decline, due to the appearance of an illiterate society, where mainly monks and the Church kept the written word alive, but wit, satire and parody were almost absent. Copying of (ancient) texts, administration and religious thoughts formed the main contents of their works.

Apart from the Carolingian efforts to create a central bureaucracy and a (Latin) school system for educational purposes, it was not until the thirteenth century that the written word made a secular come back, not by coincidence, first in the Italian city-states, universities and trade and business-oriented societies.

By the close of the fourteenth-century caricature was introduced in Italy. Since then caricature has been constantly, and often brilliantly, represented throughout Europe. The poor Marie-Antoinette (1755-1793) became one of the most targeted public figures by the end of eighteenth-century France. Satire and caricature of today are relatively mild compared to the practice at the end of this period.

It is a pity that Burckhardt, who lived and worked in Basel, could not comment on nowadays’satire that provokes such violent reactions.

Burckhardt (Weltliche Betrachtungen, posthumously published in 1905) also introduced the term Kleinstaat (Le petit état, the small state) as a reminder of its democratic qualities in a time of ever-growing authoritarian and undemocratic European superstates and powers. A reminder from the history of this famous Swiss author from Basel in Kleinstaat Switzerland. (Source Jacob Burckhardt, The Civilisation of the Renaissance in Italy, Gutenberg Project, translation 2014).