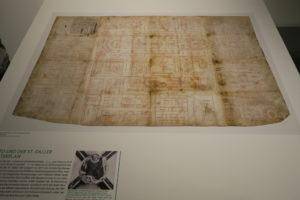 The first church in honour of and on the site of the tomb of St. Gallus was built in 719. Gallus (550-646) was an Irish monk who, together with his fellow countryman Columban (540-615) stayed in the region of Lake Constance around 610. The Luxeuil monastery was their monastery before that. A statue of Columban in front of the Luxeuil Abbey is a reminder of this.  Abbot Otmar (689-759) expanded the church into a monastic community, and the property of the monastery multiplied. Emperor Ludwig the Pious (778-840) granted the immunity privilege to the monastery in 818, transforming it into an imperial abbey, making the abbot a Reichsfürst. The golden age of the monastery began with this new status, and today the monastery is Unesco World Heritage with numerous medieval art treasures.

Thousands of writings and books, book illuminations, diaries, 850 original charters, chronicles, prayer books, and other documents make up the oldest and largest monastic archive in the world. The showpiece is the monastery plan of St. Gallen, the oldest preserved architectural drawing of a monastery. The project was made around 825 in the nearby Reichenau monastery and hows the particular concept of a (Carolingian) monastery with 45 buildings and five gardens. For the first time in its 1200 years of existence, the monastery plan is shown to the public for 20 seconds at a time, made possible by air conditioning, stable temperature of 22 degrees, a constant humidity of 45 % and dimmed light. (More information: www.stiftsbezirk.ch).