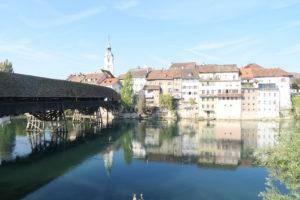 One of the most original buildings in Switzerland is the construction of the covered wooden bridge.

One of the oldest bridges is located in Freiburg, the so-called Bernbrücke, the first half of the thirteenth century. The bridge was renovated in the seventeenth century.

Lucern has the most famous covered wooden bridge, the Kapelbrücke (middle of the fourteenth century) and the famous historical frescoes, which were largely destroyed by fire in 1993, but have been restored afterwards.