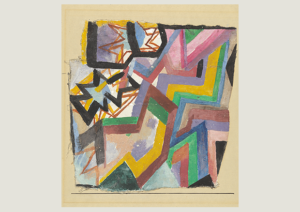 This exhibition is the first to give a comprehensive view of the consequences of the First World War (1914-1918) on the works of Paul Klee. The war robbed Klee of many of his artist friends. He commented on the political situation in his works and at the same time turned increasingly towards abstraction. Our presentation of the collection picks up central aspects of Klee’s work which originate in the time of the First World War. But the content of the exhibition also includes Klee’s life as a soldier in the First World War. Klee’s rapid rise and his journey to become one of the central figures in modern art is also illuminated with letters and documents. Because in spite of its horrors, the time of the First World War was a very productive and extremely successful one for Klee. He enjoyed his artistic breakthrough in the middle of the war and became a cult figure for young artists between 1916 and 1918.

In the years leading up to the First World War there was a mood of elation in the air. Not least for Paul Klee, who was established in the Munich avant-garde as a member of the artist’s group Der Blaue Reiter (The Blue Rider), and who had discovered Cubism in Paris. His trip to Tunisia in the spring of 1914 impelled him in the direction of abstraction. For Klee, the outbreak of the First World War in the summer of 1914 seemed at first like a severe setback. His artistic milieu suddenly dissolved: many of his friends went to war or into exile. Klee remained behind on his own in Munich.